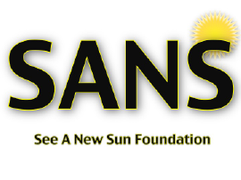 SANS (See a New Sun) was founded in 2002 by a group of concerned citizens bound by the shared tragedy of a loved one lost to suicide. In 2019, our vision expanded. We have acknowledged that substance abuse and suicide have a strong relationship. We have engaged in activities and awareness which were previously overseen by WASA (Westford Against Substance Abuse). Our mission is simple, prevent suicide by education and awareness and educate people on substance abuse. We believe education is the key to prevention, so we are currently focusing our efforts on programs such as suicide, substance abuse and mental health issues. SANS is unique in that it is the only suicide prevention organization of its kind. SANS works directly with school administrators to fund suicide awareness programs and to bring down the suicide stigma within secondary schools.

SANS primarily operates at a grass-roots level, working with schools, churches and local organizations to raise awareness of the true nature of suicide and substance abuse. We provide organizations with the tools to prevent suicide and stop substance abuse. We are currently working in Littleton and Westford to help make a difference. SANS seeks to expand services offered to organizations and works to customize offers in a sensitive yet effective way. The SOS program (developed by Screening for Mental Health, now called Mind Wise Innovations) has been the main program that SANS funds in the schools. The Herren Project (Addiction Recovery Nonprofit Organization) is currently in WA (Westford Academy) and supported by the organization. SANS is also part of the Littleton Coalition Against Addiction (LCAA).Since SANS started its necessary work, it has successfully reported multiple incidents of prevented suicides and represents hundreds of grateful recipients of our programs. Since joining to two organization into one SANS is embracing our expanded mission of Substance Abuse. The organization works with the Board of Health, schools and the communities to promote substance awareness.

About The SOS Program

SOS Signs of Suicide® Prevention program is an award-winning, nationally recognized program designed for middle and high school-age students. The program teaches students how to identify the symptoms of depression and suicidality in themselves or their friends, and encourages help-seeking through the use of the ACT® technique (Acknowledge, Care, Tell). Through the use of modeling, youth are taught to recognize the signs of distress, in either themselves or a friend, and to respond effectively.

The SOS High School program is the only school-based suicide prevention program listed on the Substance Abuse and Mental Health Services Administration’s National Registry of Evidence-based Programs and Practices that addresses suicide risk and depression, while reducing suicide attempts. In a randomized control study, the SOS program showed a reduction in self-reported suicide attempts by 40% (BMC Public Health, July 2007).